A Q & A with David Patman of the Unconscious Collective 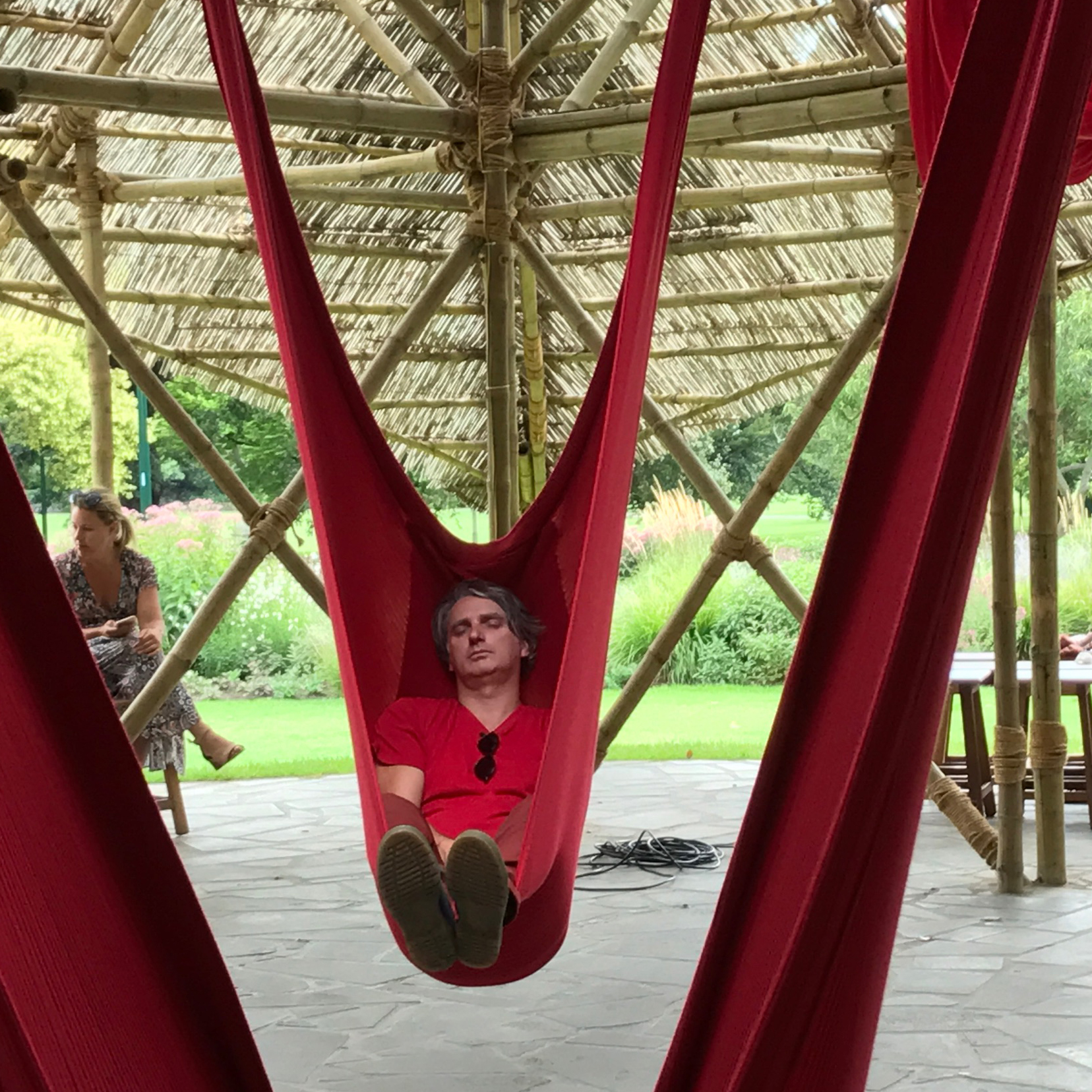 David Patman is a social theorist, digital artist and consultant who works with the unconscious social dynamics of groups and communities. Trained as an engineer with a PhD in social theory, David is interested in the sociology and cybernetics of sleeping and dreaming. David is co-founder and director of the Unconscious Collective – an informal collaboration of artists, with expertise and experience in sound, movement, contemporary and digital art and design, whose work often explores hypnagogic and liminal states such as dreams, visions, reverie and wonder. Their interest in these states is, however, less about what they might reveal about the psychology of individual audience members, and more in their significance as a shared experience that may reflect broader social narratives and concerns.

What is the inspiration behind Hypnapod?

It’s an experimental project we’ve been developing that investigates somatic connections between people – how living beings synchronise behaviour through non-verbal biological processes they may not be aware of, such as entrainment. Swarms of insects and birds seem to act as one – how does that work? Does it happen in humans?

How does it work?

We’ve created groups of soft hanging pods, like seed pods or insect pupae, equipped with sensors and speakers which amplify the occupant’s heartbeat in real time. Together the pods produce a unique ‘song’, specific to the occupants at that moment, which evolves as their heartbeats go in and out of sync.

What can a participant expect?

The week-long installation is an extension of the Hypnapod project, road-tested at M*Sync 2016, and the first time we’ve used hanging pods with our heart syncing technology.

As an audience member, you are invited to relax in an enveloping and gently rocking fabric pod, suspended from the MPavilion structure, which will automatically detect your heartbeat and play it back as musical notes in real time. As you listen to your own heartbeat, and the heartbeats of others around you, you’ll find yourself sinking, and syncing, into a collective hypnagogic doze.

The project uses the biorhythms and hypnagogic states of its participants to explore the concepts of entrainment, and ultimately, human connectivity. Let’s go a little deeper. What other things are explored and what other themes are revealed?

Heart beats have been used a lot in artwork, partly because they are relatively easy to monitor, but also because the heart is such a strong symbol of the mysterious phenomenon of life, which is probably why they’re used as a symbol in religion, romance, the occult, poetry, etc. It’s strange to feel or hear your own heartbeat, because it’s something that you’re doing, but not something you can directly control. It’s part of ‘you’, yet it’s almost like someone or something else is making it beat. So there’s an interesting contradiction there – you realise that there’s more to ‘you’ than just your conscious mind.

Another element is the cybernetic side, which is a science that studies phenomena such as rhythmic pulses, and particularly living things, which eventually reach a state of stable equilibrium, through feedback processes. It’s the idea that there is a kind of in-built self-corrective mechanism in some systems which tend to drive them toward particular overall behaviours. Our idea is that this kind of process will make people’s heart beats sync with each other.

The Hypnapod project is also a key part of M*Sync. Tell us about the collaboration that goes into this.

We’ve been working closely with Jonnine Standish and Jessie French to extend the concept of ritual from last year’s event. There are only a limited number of pods, so we wanted to find a way to involve more of the audience in a mass experience. We’ve come up with the idea to collect audience heartbeats and voices during a kind of ceremony and create a kind of multi-heart chant which gradually builds over time. We’ve invited our colleague sound artist Gail Priest from Sydney to add her voice as well.

We’ve also invited Tropic of Cancer to play with our Hypnapod heartbeats, with the idea that they could actually be accompanied by the sound of their own heartbeats, creating a kind of feedback loop – which should be interesting!

Hypnapod: Suspended cardiophonic snooze pods by the Unconscious Collective are installed in MPavilion from Thursday 9 to Tuesday 14 February and you can drop by for a sync session from 10am to 12pm and 2pm to 4pm daily.

M*Sync is on Saturday 11 February from 5pm to 9pm. It is free to attend and there are no bookings required.